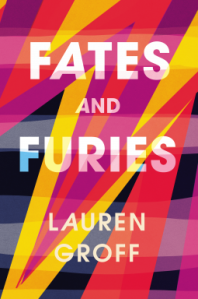 While technically nothing to do with fairy tales, Lauren Groff’s Fates and Furies draws on, and heavily refers to, mythology  and archetypes… So I’m calling it close enough.

Fates and Furies is the story of a marriage, and while it really is an intensely self-involved portrait of a relationship, it feels bigger. Groff draws a wide net, pulling in a world of mythology, philosophy and experience and concentrating it all down to a simmering and dense relationship between two people.

Her use of myths could have become overdone – there’s an early doomed relationship between Lotto (Lancelot) and Gwennie (Guinevere), a play based on Antigone that reflects themes of the book itself, countless references to Greek works and mythology, many of which I probably missed – but she uses them wisely. We are even interrupted occasionally by small asides embedded in the text: a Greek Chorus commenting on the action. I found my thinking ‘this should seem overwrought, but it works’. Groff’s writing is clever. She know when to hold back, and when to reveal.

I read Fates and Furies as a digital galley, so didn’t realised until l was quite far into the book that it is split into two parts: Fates (from Lotto’s Point of view) and Furies (from Mathilde’s). Mathilde is intentionally keep at arms length in Lotto’s section: we see his obsessive love for her, we feel it, but she is almost a paper cut-out to us the reader. I realised this was intentional, but was glad to cut to her point of view in the second half of the book.

The Fates and Furies are not just used as a catchy title. Lotto himself really is rolled along by fate. Things to happen to him. There are few times when he actively reaches out, but when he does we may find later that maybe the Furies have had some hand in his fate. The Furies, in Greek mythology, “…were female spirits of justice and vengeance. … Known especially for pursuing people who had murdered family members, the Furies punished their victims by driving them mad.” Mathilde is driven by deep rooted anger and revenge. She loves Lotto passionately, there is a ferocity at her core.

Reading Mathilde’s Furies was a deeply satisfying experience after the excess of Lotto’s Fates. Compared to Lotto’s rollicking and ever-increasingly alcohol fogged escapades, it is pointed and well tuned. It fills in gaps, and reveals truths. Some are simply her truths, a changing of our viewpoint to understand her side of their marriage, while others will rock the foundations of what you believe to be true. It is both satisfying and heartbreaking.

I loved this book. There are kindnesses and cruelties, lucky breaks and terrible injustices, love and hate and great (and well written) sex. And there is incredible language: sentences that could have failed spectacularly if not for Groff’s brave and artful writing, a self awareness that could have glared painfully in lesser hands.

I’ll leave you with this excerpt from the first page, which perfectly shows how Groff takes you to the edge of writerly excess, and pulls you back in again, and hope you’ll go get your own copy and read the rest:

For a minute they watched a tidepool full of spiny creatures that sent up curls of sand in vanishing. Then he took her face in his hands, kissed her pale lips. He could die right now of happiness. In a vision, he saw the sea rising up to suck them in, tonguing off their flesh and rolling their bones over its coral molars in the deeps. If she were beside him, he thought, he would float out singing.

Well, he was young, twenty-two, and they had been married that morning in secret. Extravagance, under the circumstances, could be forgiven.

I was lucky enough to receive a review copy through Netgalley. Fates and Furies will be released by Random House UK on September 15th, 2015.